In a word – Amazingly.

In order for a more analytic answer to the question, let us refer to the diagram that has been shared on the official website of the Saudi Ministry of Haj and Umrah. 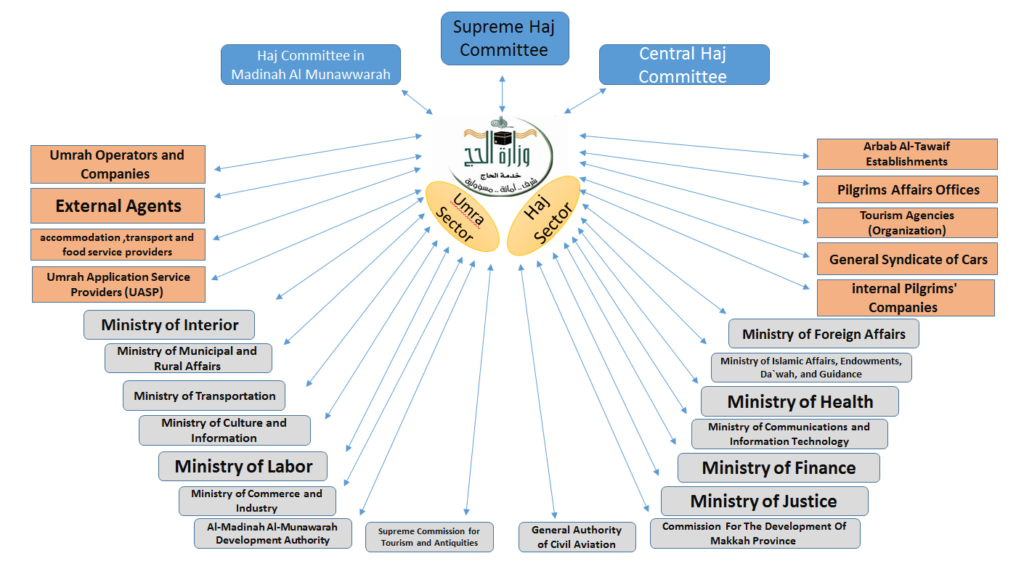 The Saudi Government manages the entire Hajj of approximately 2 million people (depending on the year) by delegating operations to a dozen of its ministries and a dozen more managerial bodies. The Ministry of Hajj is at the center and it in a one to one correspondence with each entity to give a level of service that is unprecedented to achieve every year without compromise. The Ministry of Hajj is monitored and guided by the Supreme Haj Committee of Saudi Arabia that also issues the Hajj Master Plan. Furthermore the Ministry of Hajj and Umrah has nine Tawafa establishments, each for a separate region of the world, to help and guide the pilgrims coming for hajj from that specific region. The gravity and the complexity of the entire event managing body can be understood by just glancing at the diagram above. Clearly going through each and every ministry and body that governs its separate domain to bring about a Hajj event would be a very lengthy and time consuming read; we must saliently touch just the most important ministries and bodies to answer that above question.

The Saudi Foreign Ministry processes in excess of 1.4 million visas for Hajj only. With more than 105 diplomatic missions, the Saudi embassies processes and relays through the visa information to Riyadh. All most all embassies and consulates have a separate department dedicated to Hajj and Umrah visa requests including countries in central Africa, Western South America and obviously all of the countries in the Muslim world.

Personnel of the ministry of Interior are the first people who welcome the Guests of Allah into the Kingdom of Saudi Arabia. The newly incorporated system allows the entry of every pilgrim to be done in 50 seconds, which helps when dealing with an ever staggering number of pilgrims arriving for hajj. Moreover the ministry of Hajj also is responsible for safety, security, and comfort of the pilgrims. Together with the General Traffic Department the Ministry of Interior and the National Guard subdues the traffic jams on roads that go in and out of the Haram. Officers of this ministry are on the lookout for lost pilgrims, any disturbances that might lessen the comfort of the pilgrims and desecration of the sanctity of the Holy Shrines.

The hajj pilgrimage usually hosts about two to two and a half million people each year. With that many people coming from all over the world, there is an ultra-high risk of the spread and exchange of infection. The Saudi government has taken strict action against the spread of disease. All pilgrims are required to submit a medical certificate proving that they have been vaccinated with the ACWY vaccine that curbs the spread of the meningococcal meningitis, in order to get visas. Respiratory diseases including pneumonia are also common in senior pilgrims, so the Saudi government advises all such pilgrims to be vaccinated with polysaccharide vaccines. Behavioral intervention is also encouraged, such as hand hygiene and minimum contact/contact avoidance. Recently the Saudi government has installed washing and drinking areas that let only a specific amount for water to flow over elbows and feet from auto-sensing water jets, for ablution. These new technologies do not only conserve water but also restrict the spread of germs. The Ministry of Health has also established twenty-one world class hospitals, totaling to about seven thousand beds, all available to the pilgrims through the entire Hajj season. More than thirteen epidemic investigation teams are vigilantly guarding the pilgrims in case of a hazardous situation and are on the lookout for the first signs of a major spread of disease. Additionally there are emergency clinics, ambulances, outpatient clinics and sunstroke and heat exhaustion treatment centers working 24/7 to better serve the pilgrims at every hajj. The Saudi government also insures pilgrims that are unable to pay for their medical expenses. The health standards of food items, both that are brought by pilgrims over into Saudi Arabia and those that are made in the country are all monitored by the Health Ministry as well. The quality and cleanliness of drinking water sources and the correct treatment of sewerage waste water is also monitored by the Health ministry.

Ministry of Culture and information

The Ministry of Culture is responsible for making arrangements to broadcast the Hajj event on the radio and the television. This include the live telecast of the sermon at Arafat, the rapid exit from the Arafat grounds, the stoning of the devils at the Jamarat and the primary sermon of the hajj. The Ministry has dedicated two television channels to propagate religious aims of the Hajj event, safety guidance, graphic illustration of rites and the love of Allah in the hajj season, in English, French, Persian, Swahili, Turkish and Urdu languages.

Apart from the ministries stated above other ministries also endeavor to put in their share.  For example the Ministry of Transportation monitors the standards of transportation and the availability of buses for not only to move the people rapidly into and out of the Arafat grounds, but to Medinah and Jeddah when the Hajj is complete. The Ministry of Finance allocates the financial resources to keep all the systems running, and while they do not officially share the exact running cost out of humility and grace, it is said to be upwards of 75 million dollars each year, with an investment of 50 billion dollars to build and maintain the entire Haram and Masjid Nabvi complexes and facilitating systems and structures.

To answer this question with numbers and figures only is not sufficient. We must also understand and appreciate the heart and the hospitality that the local Saudi people extend to the pilgrims that visit their country. We have all come to know about the stories of lost pilgrims and how they were directed back to their groups by Saudi volunteers, about people waving at private cars, mistaking them for taxis only to find that, when they had been dropped off at the Haram. We constantly get news of the time pilgrims run out funds and instead of money taxi drivers ask that they pray for them. In their hearts the Saudi people believe that they are put at this place to serve the Guests of Allah and if they compromise, or show a lack in hospitality, they would be removed and other better hosts would be put in their place to guard the Guests of Allah. The drive of hospitality is in the culture and the honor of being the host of the Most Holy Shrines of Islam. That drive, this emotion is far more convincing than any number or figure we can put here to perfectly describe how magnificently the Hajj event is managed.